This investigation addresses the discovery of a proposed impact crater located off the coast of Miami, FL under the North Atlantic Ocean. A preliminary analysis of bathymetry data obtained from the National Oceanic and Atmospheric Administration implied a morphology consistent with a complex crater produced by a hypervelocity impact event of extraterrestrial origin. The proposed impact features include a central peak, concentric rings, and an ejecta field to the northwest. Analysis of geological data from the US Geological Survey places the strata overlying the proposed impact site as Miami Limestone, Pleistocene, accumulated during Marine Isotope Stage 5e, thereby placing the maximum age of the proposed impact crater at 80 ka to 130 ka. Three other competing hypotheses for the formation of the structure, namely a controlled maritime explosion, radial lava flow from volcano, or a depressed bioherm, doline, or karst (solutional depression) were explored throughout the investigation. To confirm the proposed structure as an impact crater, an in-situ underwater expedition was organized by Planetary Sciences, Inc. specifically to ascertain whether planar formations, shatter cones, and shock metamorphic and or other meteoritic properties were present. After analyzing the geological samples collected at the proposed impact crater, examining the morphology of analogous geologic structures, and evaluating competing hypotheses, we conclude that the structure is a solutional doline formed by the uneven dissolution of the Miami Limestone, and, accordingly, do not recommend that the structure be indexed in the Earth Impact Database.

The Plio‐Pleistocene Upper Tamiami Formation (Pinecrest beds) of Florida is well known for its fossiliferous shell beds, but not for its extraterrestrial material. Here we report the first occurrence of tiny (~200 μm in diameter) silica‐rich microspherules from this unit and from the state. This material was analyzed using petrographic and elemental methods using energy dispersive X‐ray spectroscopy (EDS). The majority of microspherules are glassy and translucent in reflected light with some displaying “contact pairs” (equal‐sized micro‐spherules attached to each other). Broken microspherules cleave conchoidally, often with small internal spherical vesicles, but most lack any other evidence of internal features, such as layering. Using the EDS data, the microspherules were compared to volcanic rocks, microtektites, and cosmic spherules (micrometeorites). Based on their physical characteristics and elemental compositions these are likely microtektites or a closely related type of material. The high Na content in the examined material deviates significantly from the abundances usually found in micrometeorites and tektite material; this is enigmatic and requires further study. This material may be derived from a nearby previously unknown impact event; however, more material and sites are required to confirm the source of this material. Because of the focus on molluscan fossils in southwestern Florida shell beds, microtektite material has likely been overlooked in the past, and it is probable that these microspherules are in abundance elsewhere in these units and possibly throughout the region. (Meyer 2019)

“The Miami Florida structure is quite intriguing.

Second, the image of the Miami Florida structure reminds me of the circular bioherms of Childress Creek* to which exhibit a very similar internal structure and topography. Attached are excerpts from Google Earth about 31.721000 -97.380048 bousque County, Texas”

Geologists estimate the age of the Earth at about 4.6 billion years. An understanding of the geologic processes of Florida begins over 40 million years ago when the region was at the bottom of the ocean. The Florida peninsula is actually the emerging portion of a tectonic platform called the Florida Plateau; where the Florida peninsula and adjacent continental shelf occupies this plateau region. It has been suggested that the Florida plateau, since it is composed of a thick section of mostly undeformed carbonate rocks, that this carbonate platform that has been developing since the late Triassic opening of the North Atlantic which occurred about 180 million years ago. The development of the platform was controlled by regional subsidence of the passive margin and eustatic sea level changes which allowed the deposition of a thick section of carbonate rock over many millions of years. NOAA Nautical Chart 11468 indicates the structure is in less that 20′ of water.

Currently, this has been ran past two geologists with relevant credentials:

The Florida shelf is a carbonate platform that is approximately 100 km in width off of St. Augustine tapering to less than 2 km by West Palm Beach to the south

The East coast shelf is a higher energy coast influenced by the Gulf Stream in the Atlantic and comprised of siliciclastic dominated sediments to the north, grading into a mixed siliciclastic-carbonate sediment composition at approximately the latitude of Ft. Lauderdale/Miami. Rapid population growth to the coast has impacted shelf habitats, including offshore reefs—recent observations of macro algae blooms off of Broward County shelf is suspected to be the result of nutrient rich submarine groundwater discharge of anthropogenic origin (runoff, wastewater point and non-point sources). I’ve been working for a couple of years on a structure in Miami which I have yet to be able to find good reason to disprove. Having just gotten a very positive e-mail from Dr. Andrew Glikson, a month or so ago, I feel as though it is time to proceed to sampling and testing. At this point, I feel we have several challenges, and would like to get input on the matter. As this is an underwater structure, although shallow, this does present a different set of problems in sampling and analysis than those I am used to. This is in carbonate material, I’m very familiar with typical impacts in quartz-rich materials, but I’ve not seen much in the way of 100% carbonate impact zones. Questions about the expected effects in such a material are, to my knowledge, not well answered. For example, should we try to find planer deformation of grains, or will we be better advised to look for melt/breccia zones and shatter cones?

I would expect any iron to have disintegrated/oxidized due to interaction with seawater, but I intend to examine any samples for secondary mineralization that may have occurred as a result of this weathering process and interaction between the iron and seawater/carbonate country rock. There does appear to be a relatively substantial ejecta field to the north-west of the structure, and I’ve considered sampling this, but am unsure as to the viability of that material, especially given the likelihood of coral development on these rocks and my reluctance to disturb any living animals for sampling purposes, ethically and legally this could present significant challenges. As the structure is underwater, in a heavy erosion zone, my assumption would be that it is probably partially buried, but given the extreme weather that affects this area, that can likely change drastically and quickly. Theoretically, a major storm could completely unbury the feature, or could drop 5-10 feet of sediment on it. I’ve not been able to find further mapping data – this is essentially a VERY homogeneous area geologically, so there hasn’t been a great deal of remote sensing done here from what I can tell, especially at scales appropriate to this structure. If you know of any further remote sensing data or maps, they would be most welcome. Further complications involve proximity to both Fisher Island and the Government Cut, along with the fact this lies alongside a ‘dump’ site. Fortunately, it is NOT within the nearby protected marine sanctuary. To my knowledge no one has yet dived and explored the site or collected material. I currently have no samples, however, it is my intention to attempt to gather some hand samples that might reveal the character of this material. I’m also seriously considering the possibility of a core-sample, despite the serious costs associated with that investigation. One consideration is having a small ‘collar’ sub-surface support structure built and sunk within a few weeks, although this could present problems with laws meant to protect coral reefs. Although our first attempt will be simply hand-sampling with simple tools using SCUBA equipment. If anyone is interested in helping with this, I would be very glad of advice or actual hands-on assistance.

Once we have the samples we will proceed with macro and micro level examinations and characterization, hopefully revealing at least several diagnostic features that would be expected in a crater of this size. 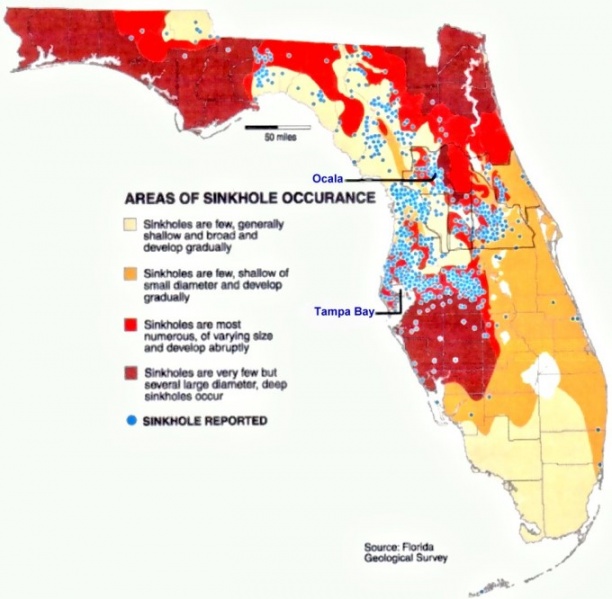 Sinkholes are a common feature of Florida’s landscape. They are only one of many kinds of karst landforms, which include caves, disappearing streams, springs, and underground drainage systems, all of which occur in Florida. Karst is a generic term which refers to the characteristic terrain produced by erosional processes associated with the chemical weathering and dissolution of limestone or dolomite, the two most common carbonate rocks in Florida. Dissolution of carbonate rocks begins when they are exposed to acidic water. Most rainwater is slightly acidic and usually becomes more acidic as it moves through decaying plant debris.

Limestones in Florida are porous, allowing the acidic water to percolate through their strata, dissolving some limestone and carrying it away in solution. Over eons of time, this persistent erosional process has created extensive underground voids and drainage systems in much of the carbonate rocks throughout the state. Collapse of overlying sediments into the underground cavities produces sinkholes. When groundwater discharges from an underground drainage system, it is a spring, such as Wakulla Springs, Silver Springs, or Rainbow Springs. Sinkholes can occur in the beds of streams, sometimes taking all of the stream’s flow, creating a disappearing stream. Dry caves are parts of karst drainage systems that are above the water table, such as Marianna Caverns.

Other subterranean events can cause holes, depressions or subsidence of the land surface that may mimic sinkhole activity. These include subsurface expansive clay or organic layers which compress as water is removed,collapsed or broken sewer and drain pipes or broken septic tanks, improperly compacted soil after excavation work, and even buried trash, logs and other debris. Often a depression is not verified by a licensed professional geologist or engineer to be a true sinkhole, and the cause of subsidence is not known. Such events are called subsidence incidents.

The Edwards Limestone of Central Texas is comprised of numerous rudist-dominated patch reefs that are collectively referred to as the Central Texas Reef Trend. These bioherms were protected by the Stuart City barrier reefs along the Texas Gulf Coast. The Stuart City reefs have been compared with the modern barrier reefs of Australia and Belize, but there is currently no modern analog for the Central Texas bioherms. Bermuda was chosen for a modern analog study based on the existence of a protective rim reef system, its low biodiversity, and a slower reef growth rate as compared with other modern reefs. Although the patch reefs of Bermuda were determined to be “similar” to the Central Texas Edwards Limestone bioherms in many respects, the high temperatures and unique oceanographic conditions of the Cretaceous likely means that no exact modern analog for the rudist-dominated Edwards bioherms exists.