The direct ancestors of the dinosaurs (early Archosaurs)  and mammal-like reptiles (Therapsids) originated within 10 million years of each other within the Triassic Period of the Mesozoic Era. They co-existed for some 30 million years along with the reptilian ancestors of modern-day crocodiles. The reptiles with diverse body types were more successful than early dinosaurs and mammals during this time.

At the End Triassic (Tr-J) extinction, the crocodile relatives (reptiles) were almost completely gone and the dinosaurs began their 135 million-year domination on our planet.

After the Cretaceous-Paleogene (K–Pg) extinction 66 million-years-ago, the non-avian dinosaurs were completely gone and mammals began their domination of our planet.

The following physical, chemical and biological alterations occurred on our planet  during the Tr-J and the K-Pg extinctions:

The K-Pg extinction that ended the non-avian dinosaurs is well explained. But there is a mystery of how the reptiles lost their domination at the Tr-J extinction allowing the dinosaurs to dominate.

My article documents the influence the two separate extinctions had on the physical, chemical and biological alterations on our planet and their common characteristics.

“The K–Pg extinction event, a sudden mass extinction of some three-quarters of the plant and animal species on Earth, was caused by a large bolide impact. In 1990 Hildebrand et al. showed that the source crater for the K-Pg extinction is probably the 180-km-diameter Chicxulub crater which lies on the Yucatan Peninsula, Mexico. Non-avian dinosaurs did not survive this event” (Hildebrand 1993).

“The K-Pg boundary clay is known to consist of two layers:
– a globally-distributed, uniform ~3-mm-thick layer which was probably dispersed by the impact fireball and
– a layer found only near the source crater composed of ballistically-distributed ejecta.
Chondritic siderophile trace -element anomalies, shocked minerals and tektites have been subsequently found in the K-Pg boundary layers” (Hildebrand 1993).

“The mass of the Chicxulub asteroid is calculated to be about 300 billion metric tons with an asteroid diameter 10 ± 4 kilometers (km), determined from the iridium measurements in the K-Pg boundary (about 100 times natural concentrations), the concentration of iridium in so-called chondritic meteorites and the surface area of the Earth, ” (Alverez 1997).

The Deccan Traps began forming 66.25 million years ago at the end of the Cretaceous period. This series of eruptions may have lasted less than 30,000 years in total.

The lava flows covered 1.5 million km2 of  western India with multiple layers of solidified flood basalt more than 2,000 m thick. The Deccan Traps region was reduced to its current size by erosion and plate tectonics; the present area of directly observable lava flows is around 500,000 km2. 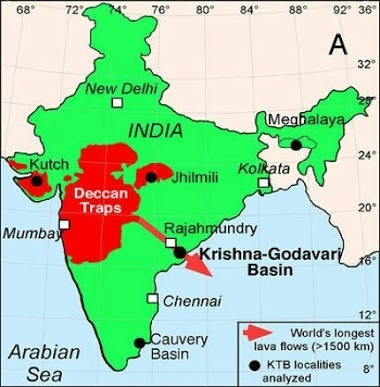 The Chicxulub asteroid impact and the eruption of the massive Deccan volcanic province are two proposed causes of the end-Cretaceous mass extinction, which includes the demise of nonavian dinosaurs.

“U-Pb zircon geochronology of Deccan rocks show that the main phase of eruptions initiated ~250,000 years before  and continued for 500,000 years after the Cretaceous-Paleogene boundary.  More than 1.1 million km3 of basalt erupted in those ~750,000 years. The Deccan Traps contributed to the latest Cretaceous environmental change and biologic turnover that culminated in the marine and terrestrial mass extinctions.” (Schoene 2015)

“There is evidence for the triggering of magmatism on a global scale by the Chicxulub meteorite impact at the Cretaceous-Paleogene (K-Pg) boundary, recorded by transiently increased crustal production at mid-ocean ridges. Concentrated positive free-air gravity and coincident seafloor topographic anomalies, associated with seafloor created at fast-spreading rates, suggest volumes of excess magmatism in the range of ~105 to 106 km3. Widespread mobilization of existing mantle melt by post-impact seismic radiation can explain the volume and distribution of the anomalous crust. This massive but short-lived pulse of marine magmatism should be considered alongside the Chicxulub impact and Deccan Traps as a contributor to geochemical anomalies and environmental changes at K-Pg time.” (Byrnes 2018)

“The Chicxulub impact produced a massive pulse of shock-devolatized CO2 and SO2 because the target rocks included a thick sequence of carbonates and sulphates and was therefore particularly lethal for an impact of its size. The addition of these gases to the atmosphere led to a global sulphurous acid rain and a long-term CO2 greenhouse warming of ~10° Celsius. The Chicxulub impact was orders of magnitude more deadly to the environment than any known terrestrial process such as volcanism. Extinction-causing impacts of this size reoccur approximately once every 100 million years thereby altering the long-term evolution of life on earth” (Hildebrand 1993).

Dated within the 237-201.3 million-year time frame of the End Triassic, many large bolide impacts have been identified at present-day northern latitudes. They range from 9 to >100 km in diameter.

The presence of impact structures with Late Triassic ages suggests the possibility of bolide impact-induced environmental degradation prior to the end-Triassic.

214 Ma – LATE TRIASSIC EJECTA – SW BRITAIN
“The documented late Triassic spherule layer of SW England deposit contains an abundance of spherules, common shocked quartz and a suite of accessory minerals believed to have been derived direct from the impact site. These include garnets, ilmenites, zircons and biotites. Garnets and ilmenites are highly fractured, and biotites show prominent kink bands indicative of shock” (Thackrey 2009) .

“New analyses confirms Ir enrichment (up to 0.31 ng/g) in close proximity to the palynological Triassic–Jurassic boundary in strata near the top of the Blomidon Formation at Partridge Island, Nova Scotia. High Ir concentrations have been found in at least two samples within the uppermost 70 cm of the formation. There is enrichment of some  platinum group elements (including Ir) and transition group elements in strata that occur at, and in close stratigraphic proximity to, the horizon of palynological turnover that is interpreted as the Triassic–Jurassic boundary in the Fundy basin” (Tanner 2005).

Two volcanic episodes in the Triassic are significant to dinosaur evolution:

1. “The Central Atlantic Magmatic Province (CAMP) is the Earth’s largest continental large igneous province, covering an area of roughly 11 million km2. It is composed mainly of basalt that formed prior to the breakup of Pangaea near the end of the Triassic and the beginning of the Jurassic periods.

The Tr-J multi-sized impact events formed prior to commencement of the CAMP volcanic episode by several million years.

Widespread eruptions of flood basalts of the Central Atlantic Magmatic Province (CAMP) were synchronous with or slightly postdate the Late Triassic boundary” (Tanner 2004).

“The Bay of Fundy terrestrial redbeds of the Blomidon Formation were deposited during the late Triassic and early Jurrasic. A 10-m-thick zone of intensely deformed strata that occurs near the base of the formation is characterized by faulting. Correlation of this zone basin-wide indicates that it is a record of a very powerful paleoseismic event. The presence in strata just above the deformed zone of quartz grains displaying features of shock metamorphism raises the intriguing possibility that reactivation of the fault zone was triggered by a bolide impact” (Tanner 2002).

2. “Wrangellia flood basalts formed as an oceanic variety of a large igneous province (LIP) in the Middle to Late Triassic, with accretion to western North America occurring in the Late Jurassic or Early Cretaceous” (Richards et al., 1991).

“The dinosaurs had a sudden growth in size at the of the end of the Carnian Pluvial Episode (CPE) in the Triassic period. This was a time when climates shuttled from dry to humid and back to dry again.

“At the CPE, the massive eruptions in western Canada, represented today by the great Wrangellia basalts, caused bursts of global warming, acid rain, and killing/extinctions on land and in the oceans”  (Bernardi 2018).

It is suspected that the Wrangellia had a telling effect at the CPE and the beginning of the 135 million-year dinosaur domination.

Cretaceous–Paleogene (K–Pg) – 66.043 ± 0.011 million years ago – the end of the dinosaur era
“Sixty-five million years ago, a comet or asteroid larger than Mount Everest slammed into the Earth, creating the Chicxulub crater, inducing an explosion equivalent to the detonation of a hundred million hydrogen bombs. Vaporized detritus blasted through the atmosphere upon impact, falling back to Earth around the globe. Disastrous environmental consequences ensued: a giant tsunami, continent-scale wildfires, darkness, and cold, followed by sweltering greenhouse heat. When conditions returned to normal, half the plant and animal genera on Earth had perished” (Alverez 1997). The non-avian dinosaurs were now extinct, making way for mammals to evolve and dominate our planet.

Dinosaurs originated about 245 Ma, during the recovery from the Permian-Triassic mass extinction. They remained insignificant until they emerged in diversity and ecological importance during the Late Triassic Tr-J event, 201 million years ago. Thus began the 135-million-year dinosaur domination of our planet.

At the K-Pg 66 million years ago, a bolide impact ended the reign of the non-avian dinosaurs.

The geomorphometry of the K-Pg and Tr-J events were compared to illustrate their similarities.

“However, the mode and timing of the origin and diversification of the dinosaurs at the Tr-J have so far been unresolved” (Bernardi 2018).

“There is serious debate on whether the ETE actually exists, or whether it was an event that was attenuated over ~40 Ma (almost 2/3 the time span of the Tertiary!)”(David E. Brown – private correspondence 2018).

Walter Alvarez  T. rex and the Crater of Doom  University of California, Berkeley (1997)

Stephen Brusatte The Unlikely Triumph of Dinosaurs Scientific American (May 2008)

Alan R. Hildebrand, The Cretaceous / Tertiary Boundary Impact – the Dinosaurs Didn’t have a Chance Journal of the Royal Astronomical Society of Canada, (APR, 1993)

Lawrence H. Tanner, STRATIGRAPHIC RECORD IN THE FUNDY RIFT BASIN OF THE MANICOUAGAN IMPACT: BOLIDE WITH A BANG OR A WHIMPER?  Geography and Geosciences, Bloomsburg Univ (2002)