a The age of the Eagle Butte structure is generally given as <65 million years. This is based on upper Cretaceous rocks that are shatter-coned and the Pleistocene glaciation that has eroded the structure (Grieve 2006).

The Eagle Butte impact occurred <65 million years ago in the Paleocene Period. At that time CO2 was at two times present levels and O2 at 27% of atmosphere (vs 20.946% today). The building of the central Rocky Mountains was underway and the Deccan Traps continued to erupt. 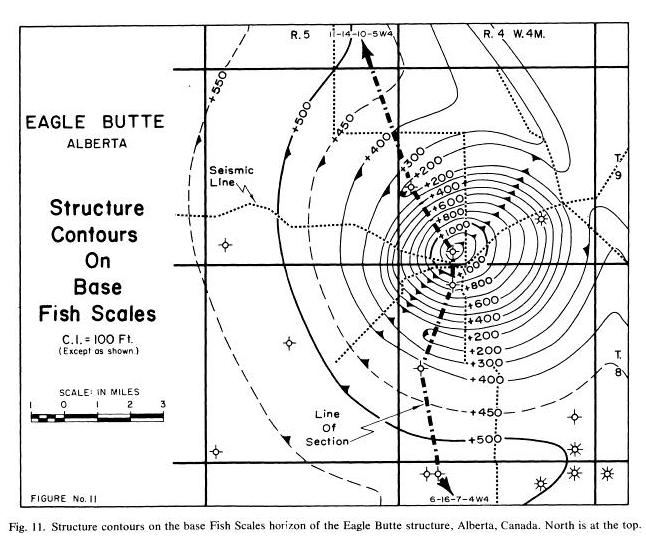 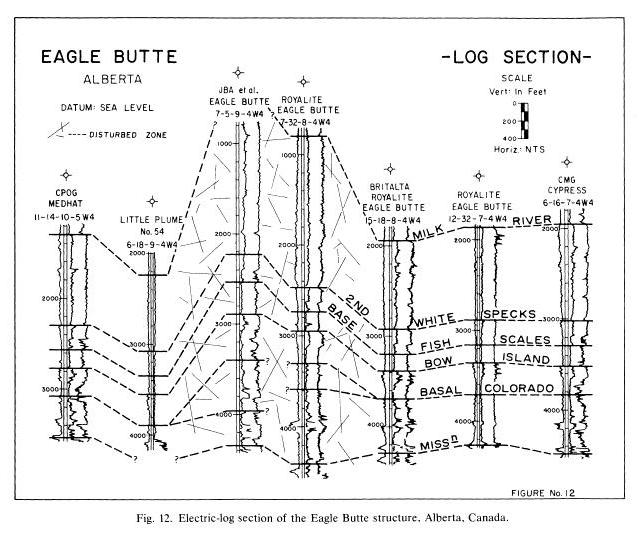 The diameter of the Eagle Butte Structure is approximately as great as 17 km. Originally it consisted of a central uplift with a radius of 2.5 km, surrounded by a 2 km wide moat and a 4 km wide fractured rim. It is estimated that the floor of the moat was at least 180 m below, and the top of the central uplift more than 200 m above the regional surface. The rim on the northeast side of the crater was raised to a height of at least 120 m.

Presently, there is little or no surface expression of the Eagle Butte structure. Substantial erosion of the central uplift and crater rim took place from the Eocene to the Pleistocene. In contrast, the low lying area of the crater moat underwent little or no erosion. The entire uppermost Cretaceous section appears to be preserved within the moat. This would place the time of impact at the Cretaceous/Tertiary boundary (~65 Ma) or later (Visser 2005).

The Eagle Butte structure was definied as an impact event with the discovery of shatter cones and planar fractures in quartz. The structure is covered with glacial overburden and is portrayed on geological maps as a circular to oval area, ~16 km in diameter with complex faulting. The subsurface character is that of a complex structure, with a structural trough and a central uplift (Grieve 2006).

The Eagle Butte impact structure is located in southern Alberta with a ~15 km diameter of the circular outline. The unknown faulting pattern on the surface was first noticed by Haites and Van Hees [1962] and the impact origin was only confirmed recently by the discovery of shatter cones near the central uplift [Hanova et al., 2005]. Of all the impact structures found within the Western Canada Sedimentary Basin (WCSB), the Eagle Butte crater is one of the best studied with a combination of information from outcrop exposure, 2D and 3D seismic imaging, and well log mapping [Hanova et al., 2005; Sawatzky, 1976]. On the representative seismic image (Figure Hanova [2005]), significant impact features are displayed including a central raised core, a severely faulted annular syncline, listric normal faults2, and structural thinning and thickening. Based on the displacements of a target bed in the Cretaceous, the structure is estimated to have formed between the Cretaceous and the Lower Tertiary. 2 Listric faults: can be defined as bent normal faults with a concave upwards fault surface. Such faults usually develop in extensional regimes. (Xie W. 2014).